From 28th of June 2015 until the 4th of July 2015 the above mentioned foresters, from the D.A.M.T. (Decentralized Administration of Macedonia- Thrace) participated in the 2nd LIFEGENMON transect drive representing the DAMT/Greece.

During the drive the members of the team, had the unique opportunity to visit forest stands, forest genetic resources, management facilities, and forestry infrastructure in F.Y.R.O.M., Serbia, Croatia, Bosnia, Hungary, Slovenia. Through a carefully pre-planned intensive program and presentations organized from national focal points (NFPs) and local expert teams, the members of the 2nd transect drive were thoroughly   informed about the local stands and forestry management practices, dangers, and challenges.

In this report we will attempt to summarize on the gained knowledge and experiences and hifhlight the similarities and differences between them and our own conditions and practices. For simplicity and accuracy reasons we will follow the daily report form.

Day 1-2: During the first day (28th of June 2015) we traveled from Thessaloniki to Skopje through the valley of Axios river (Vardar) in the southern part of F.Y.R.O.M. Although the area crossed was mainly agricultural (vineyards), it was partially covert from low (coppice) oak forests, and other broadleaved species common to the lower altitude areas of northern Greece.

The apparent absence of  forest roads system was noticeable through this drive, which is basically an indicator of low intensity forest management.

During the second day we participated in a meeting with the local NFP (prof. dr. Vlatko Andonovski), the head of the F.Y.R.O.M. forestry sector Mr.Vojo Gogovski and his assistant. We were given a briefing about the F.Y.R.O.M. forestry sector. In general the most impressive figure was the 41% of the total country area which is forested, in contrast with our own low percentage (around 18%). Another difference is the existence of  a dedicated forest police force (380 persons uniformed and armed), in addition to the forest management organization which is a state owned forestry company (PE Macedonian forests). In Greece the enforcement of forest laws and everyday forest management is done by the same organization which is the (public) Forest Service. It seems that this division could be considered as a possible  improvement in order to increase the flexibility of the forest management sector in Greece, while maintaining the enforcement of the law strictly within the core of state responsibilities.

The afternoon of the second day (Monday 29/06/2015) the Lifegenmon  team traveled to Serbia through mountaineous areas and roads. During the trip we observed the gradual change of the forest cover to more dense,  high Oak and Fagus sylvatica forests.

Day3: The third day (-Tuesday 30/06/2015)  started with our visit to Kopaonik National park-Serbia. Firstly we visited an ICP-level II forest monitoring plot operated by the Beograd Forestry Institute. This plot was very well equipped and carefully maintained, in contrast to our own ICP plots level I which we are monitoring in our area (Although the level difference must be taken into serious consideration).

This visit was completed by a presentation of the Kapaonik national park management body and its activities by the deputy director Srđan Simović. In the heart of the Park area lies a famous ski centre, with all the relevant heavy infrastructure constructions (roads, hotels dispersed in the forest, ski tracks and lifts etc.) In the surroundings the landscape is covered by dense high Northern Spruce forests and also Silver Fir stands.

In Greece the national parks are, (in general), areas under very strict nature protection laws which prohibit intensive tourism activities like skiing centres. The coexistence of these activities in Serbia-mount Kopaonik makes it seem to be possible. Further research on this subject could be useful in order to cover the costs  of nature protection, in our national parks.

Day 4: On the next day (–Wednesday 1st July) we travelled  to mount Tara national park Serbia. On the road we saw extensive plantations of Pinus strobus. This is a rather unusual sight for us whereas in our country the forest vegetation is native, plantations are very small, and mostly on flatlands-river banks with Poplars.

At the national park visitors centre at Mitrovac we attended a presentation by the park forest engineer Ranko Milanović. Tara national park (as in the case of Kopaonick) is managed by a public-state owned – forestry enterprise. The necessary funds for the operation and development of the park are partly as a result of forestry production- a fact which is rather impressive for our practice. At Tara national park, authorities conduct a full inventory of the trees all year-round. This technique allows them to develop a very accurate monitoring system and data statistics. To apply something like this in Greece would be extremely desirable but the cost of it would be tremendous (with much higher wages than Serbia). 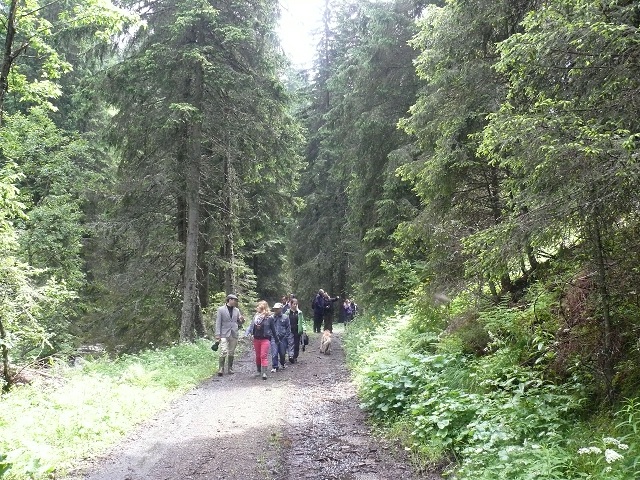 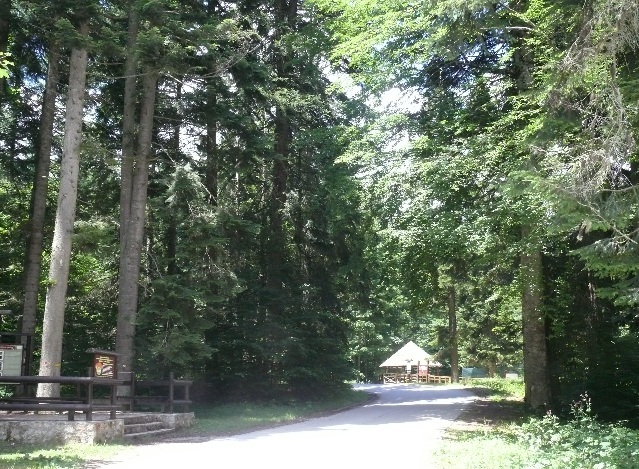 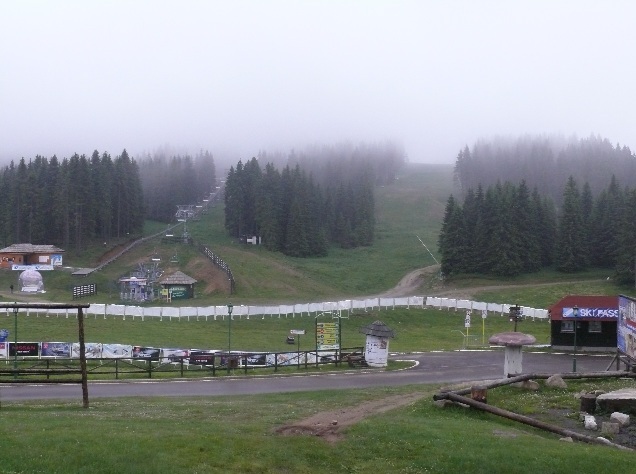 In comparison both the Kopaonick and the Tara national parks are  following the same operational and management model, consisting of a state owned – public enterprise organization responsible for the area, capable of producing-collecting its own funds-taxes. But it seems like that the Tara model based on forestry and “light”-extensive touristic activities is different to that of Kopaonick  (mass tourism – skiing etc).The former (Tara) would be more appropriate for the conditions on many mountainous national parks of Greece, and should be further studied. This model is very different from ours, consisting of a local public body with extensive regulatory responsibilities, but with centrally (central government) allocated funds and minimal field capabilities-actions.

On the afternoon of the same day we arrived at Bosnia-Herzegovina where we visited a selected seed stand near Visegrad. We were happy to see that forestry colleagues from this country, despite the many difficulties of the past, have managed to maintain their seed production stands-and profit from them- in contrast with our country where long established seed production stands were considered economically non viable and abandoned – subjected to ordinary wood production management practices.

Day 5: (Thursday, 2nd of July 2015)  – Kopački rit: The fifth day we visited the wetlands of Kopački rit -Croatia- in the area where the Danube meets the Drava river. It’s a wetland park of 321 km2 protected under the Ramsar convention. We attended a presentation at the park information center and also participated at a river excursion. There we had the opportunity to observe many protected bird species. In the afternoon, during the stop at Šumarija Batina, the chief of the forest management unit, Stanko Antunović, presented us the state forest company Hrvatske šume, which manages 80 % of Croatian forests.

From the discussions we understood that the old forest Service of Croatia has evolved to a public enterprise undertaking all the productive activities while the regulatory-legislative responsibilities have remained within the central government, but to a much smaller body-service.

Day 6 (Friday, 3nd of July 2015): On day six we visited Hungary and we enjoyed the company of LIFEGENMON Hungarian NFP dr. sc Sándor Bordacs, the state authority for forest reproductive material and forest genetic resources at the Hungarian Ministry, responsible for Forestry. First we visited the forest nursery in Tolna, operated from the Gemenc forestry enterprise (again following the state enterprise model which seems common in most of the 2nd transect drive countries). Hungary is divided into 22 forestry enterprises and the Gemenc  forestry enterprise manages 39.000 hectares, of which 34.000 is forest. Once again the responsible for the forest ministry has only a regulatory role. Their (Hungarian) Poplar nurserie-practice seems similar to ours (clonal plantations, stool beds, demonstration plantations etc), but it is obviously different – more precise control procedure established for the protection of clones-genetic resources in the everyday practice. 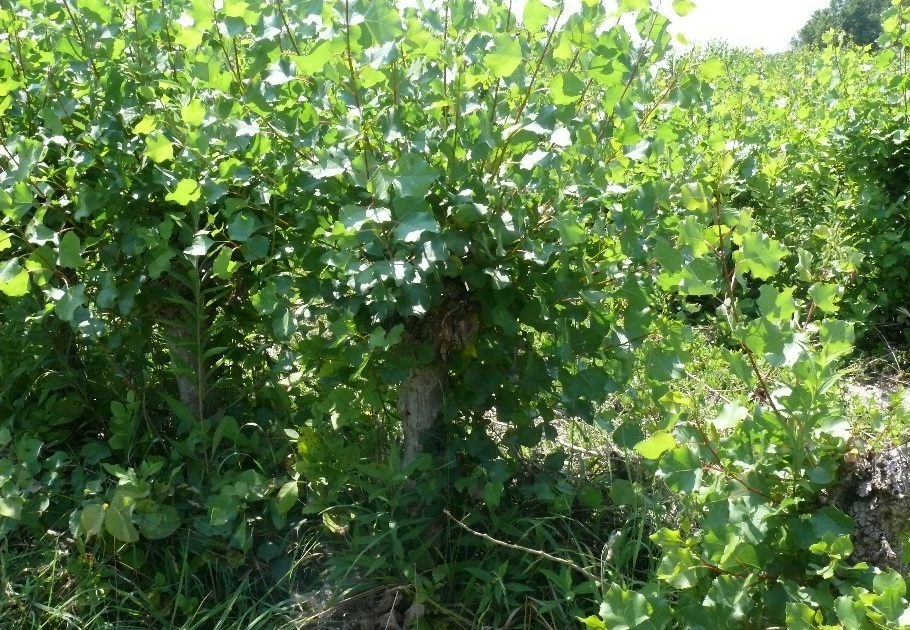 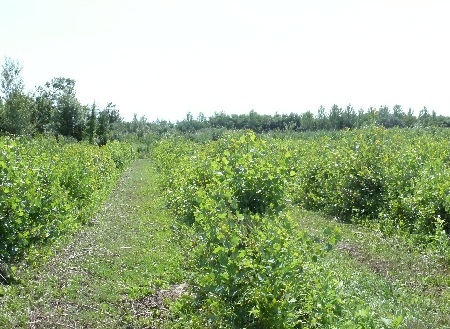 Another interesting stop  was at a hunting reserve in the Gemenc area, famous for its game, mostly red deer and wild boar. There we had the chance to be informed, understand and see the different approach-mentality under which the Greeks practice hunting.

At the Mecsek forest enterprise, the forestry engineer and the director of the department, Szonyi Janos, welcomed us and presented to us the company’s organization and structure.

We also  visited a 90-120 year old beech forest on a northern exposed slope mixed with oaks and linden, The bedrock was limestone with Karst holes. It was noted that common beach regenerates well. Beech stands are common in northern Greece, but in higher altitudes (above 800m) it is considered an easily regenerated species. It was also notable that Croatian forest enterprises are trying to increase the timber value extending the rotation period- age of maturity

Of course Hungarian foresters seem also to use different cultivation practices, (final clearcuttings in small areas-around 1-3 hectares- at maturity age), which require disciplined logging and produce more or less even aged unions and stands, but with the continuous danger of regeneration gaps (even without grazing). 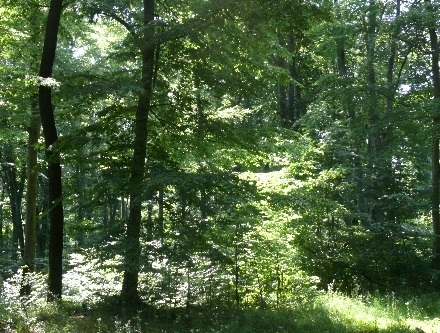 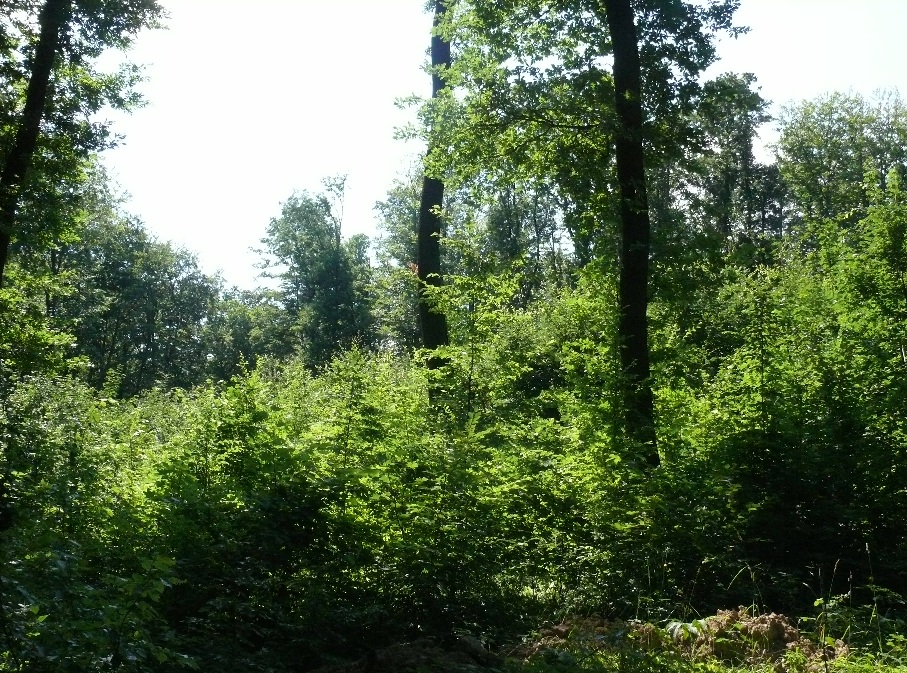 In contrast with that, in Greek forestry practice we are applying under canopy cuttings- selective thinning which allows us more flexibility- a more economically viable approach with shorter maturity ages producing smaller diameter (market needed) products. There are also smaller dangers for the regeneration (despite sometimes- light grazing from domestic animals). The drawbacks are that our logging procedures are more expensive, the resulting forest is uneven aged in large areas (actually not a drawback from an ecological stability point of view), and our stands will never reach maximum value maturity because of lack of logging discipline.

Day 7: (4th of July 2015).We visited Bjelovar the forestry enterprise from Hrvatske Šume- Croatia. Basically they presented us their very well established and maintained seed orchard of Pedunculate Oak, and a smaller elm conservation orchard. These orchards were very impressive and compered with our seed orchards and once again this observation created negative feelings. 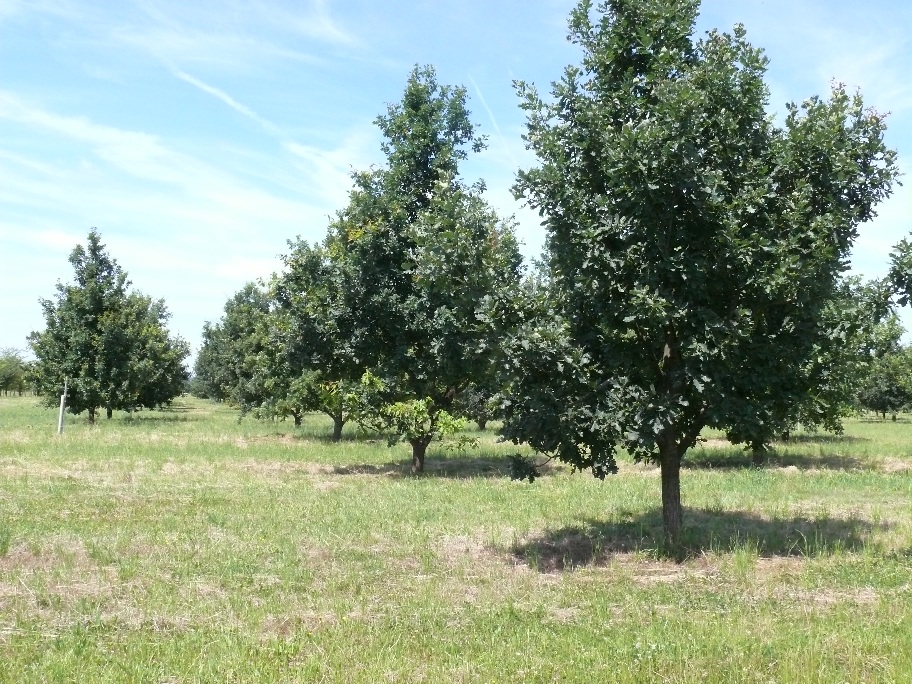 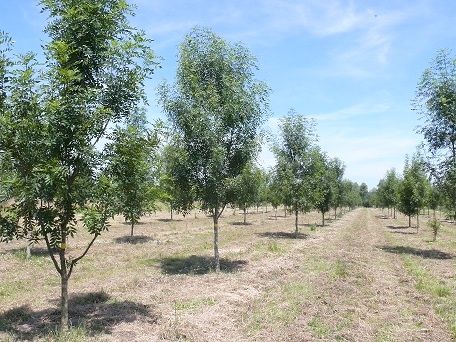 At the end of the day –that marked the end of the transect drive- we visited the Slovenian forest genetic monitoring plot for beech near Dvor in Slovenia. During the drive to the plot we observed that the beech stands of the area are relatively even aged stands of excellent timber quality. This is a result of combined favourable environmental conditions and group selection forest management practice. At the plot  Domen Finžgar, a forestry engineer from the Slovenian forestry Institute presented the plot establishment procedure, marking and sampling. 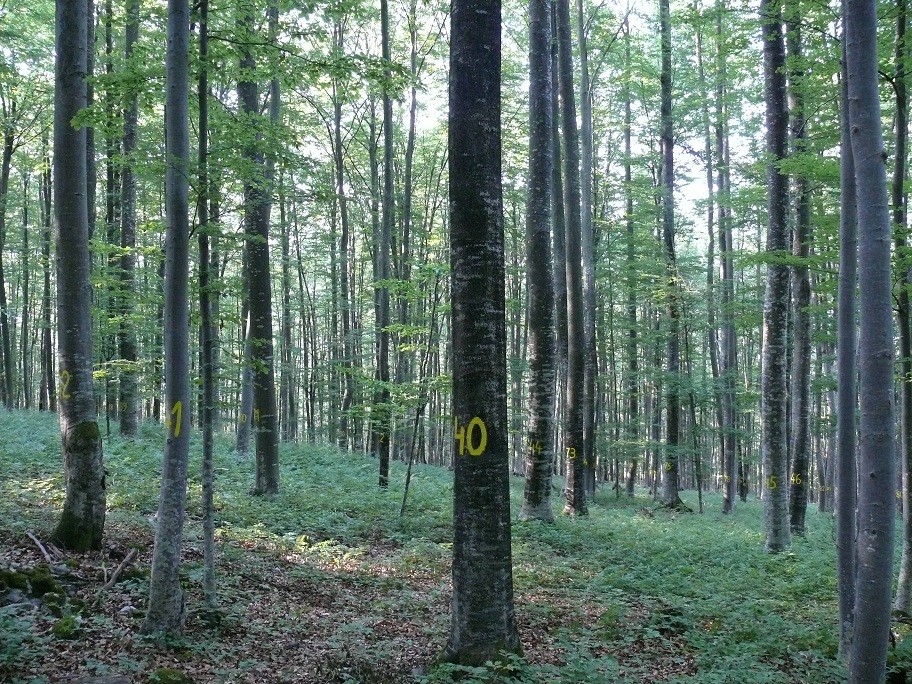 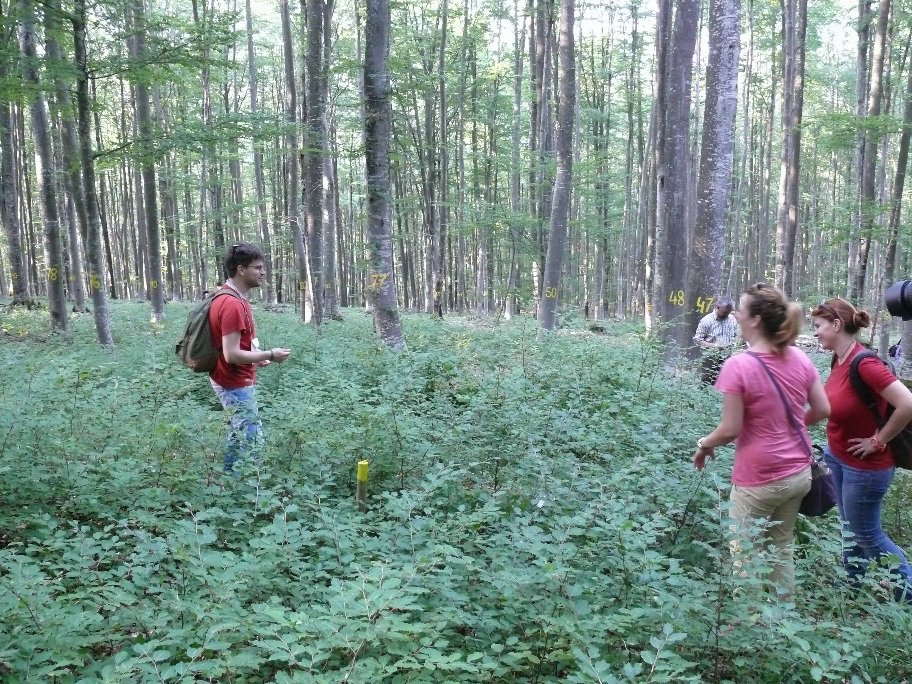 As the Slovenian plot is located in an even aged seed stand it was expected that the plot would present many “plus” phenotypes in a small area. Nevertheless the quality of the growing stock was excellent by the Greek “standards”. Also in this case the group selection procedures resulted in an even aged stand. Mechanized logging on stands with relatively high canopy brake (as in the case of seed production stands ) results normally in soil scraping and dense Beech regeneration.

The ‘Stay at home’ taught us to be effective through e-meetings :) Let’s make it a movement :) How much energy can be saved and pollution prevented through tele-conferencing also when the corona-virus outbreak is constrained :) https://t.co/e5LOApEB6I